The Eskimo and The Oil Man

The Eskimo and The Oil Man 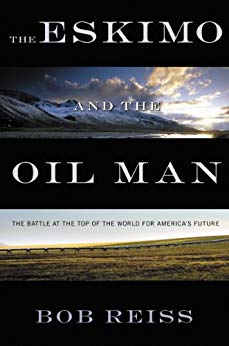 As the first “What’s New” installment, I thought I’d confess to being an oil and gas industry reading junky, and share the most recent book I’ve read on the subject. A while back I googled Micky Becker (Alaska-specific community relations, government relations, and social investment strategies and management extraordinaire) trying to find a contact number for her and stumbled across the book The Eskimo and The Oil Man: The Battle at the Top of the World for America’s Future by Bob Reiss. This book came up when I googled Micky as she is mentioned in it, as well as a handful of other folks we all know and love!

It was published in 2012 and covers Shell’s attempts to drill offshore on the North Slope of Alaska. The description from Amazon is copied below, with a link to the book. I found it an especially interesting read considering the continued and renewed interest and information available regarding the potential opening of an Arctic/Polar/Northern shipping route.

From Amazon’s Description of The Eskimo and the Oil Man:

“The Arctic century is upon us. A great jockeying for power and influence has erupted among nations in the high north. At stake are trillions of dollars in profit or loss, US security, geopolitical influence and the fate of a fragile environment as well as the region’s traditional people. As the ice melts and oil companies venture north, the polar regions may become the next Panama Canal, the next Arabian Peninsula-places on earth that remain relatively unknown in one century and become pivotal in the next. Now Shell oil plans to sink exploratory wells in the pristine waters off the North Slope of Alaska-a site that the company believes contains three times as much oil as the Gulf of Mexico.”

THE ESKIMO AND THE OIL MAN tells this story through the eyes of two men, one an Iñupiat Eskimo leader on Alaska’s North Slope, the other the head of Shell Oil’s Alaska venture. Their saga is set against the background of an undersea land rush in the Arctic, with Russian bombers appearing off Alaska’s coast, and rapid changes in ice that put millions of sea mammals at risk. The men’s decisions will affect the daily lives of all Americans, in their cities and towns and also in their pocketbooks. The story begins as a fight and ends with a surprise.

In the spirit of Thomas L. Friedman’s Hot, Flat, and Crowded, bestselling author Bob Reiss traveled in America’s High North over three years and spent time with scientists, diplomats, military planners, Eskimo whale hunters and officials at the highest levels of the government. He traveled to remote villages and sailed on a US icebreaker.

THE ESKIMO AND THE OIL MAN reflects the issues dividing every American community wrestling with the balance between energy use and environmental protection, our love of cheap gas and the romance of pristine wilderness.

Find The Eskimo and The Oil Man: The Battle at the Top of the World for America’s Future on Amazon.